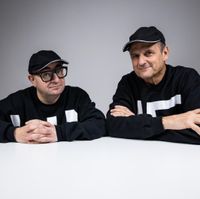 Radcliffe celebrated his fortieth year in radio last year and has worked on local radio in Manchester as well as BBC Radio 1, Radio 2, Radio 3, Radio 4, Radio 4 Extra, Radio 5 Live and 6Music. He has presented many programmes for television including ‘Music for Misfits: The Story of Indie’ on BBC 4 and is one of the mainstays of the BBC’s TV coverage of the Glastonbury Festival. He has released many albums with his bands The Shirehorses, The Family Mahone and Galleon Blast and is also the author of four best-selling books with his fifth, ‘Crossroads’, published in 2019. Mark is in remission from head and neck cancer and ‘loving life’.

Langley was a long time habitue of Manchester’s legendary Hacienda where he was a regular dj fixture in the company of his brother Bobby. Signed to Rob’s Records, the label launched by New Order manager the late Rob Gretton, Paul honed his recording, programming and mixing skills working closely with the Factory Records family.