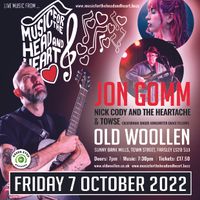 Jon Gomm, is an acoustic singer-songwriter with a revolutionary virtuoso guitar style, where he uses one acoustic guitar to create drum sounds, bass lines and twisting melodies all at the same time. The emphasis is still on the soulful vocals and song writing, and his original material is influenced by everything from Robert Johnson to Radiohead. His live shows combine deeply personal, emotive performances and a natural wit, with a once seen, never forgotten two-handed guitar style, both physical and complex, producing sounds people can barely believe are coming from a humble acoustic guitar.

“Wonderful playing and singing” - David Crosby (Crosby, Stills and Nash) “Hands down the most amazing guitarist I have ever seen!” - Tommy Lee (Motley Crue)

Nick Cody and The Heartache Nick Cody is a prolific singer songwriter who heads “The Heartache” his first roots based electric ensemble, after front two acoustic bands “The Caravan of Dreams” and “The Small Change Diaries”

Towse from USA Towse is a musical project from Singer-songwriter Grace Fellows. Grace grew up in Southern California where she was home schooled and spent her childhood immersed in the arts. She went to Ventura college and then Cal Arts to study music. She is now living in London studying an MA for Pop Music at BIMM