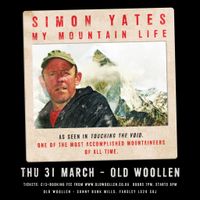 One of the most accomplished exploratory mountaineers of all time. Simon Yates is best known for his role in the harrowing expedition to the Andes documented in Joe Simpson’s bestseller ‘Touching The Void’, later made into a film and stage play.

On the remote Siula Grande in Peru in June 1985, mountaineer Simon Yates found himself in a desperately unenviable position. He was slowly being pulled off the mountain face by his injured partner, Joe Simpson, dangling on the rope 50 metres below. His decision to cut the rope saved both their lives in the epic of survival that followed.

Following that experience in Peru, Simon has been increasingly drawn to places where few others have trod. This illustrated lecture features spectacular images and film of the most remote and rarely explored mountain ranges of the world from the Arctic to the Antarctic and Alaska to Central Asia - there is hardly a significant range that Simon has not visited.