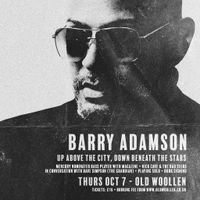 Barry Adamson will be In Conversation with Guardian journalist Dave Simpson, as well as answering questions from the audience, playing solo songs and signing books.

Brought up in Manchester’s Moss Side, Adamson learnt to play the bass overnight for Magazine, Manchester’s most influential band of that era.

When they disbanded, five albums later in 1981, his singular style was spotted by The Birthday Party, with whom he played several times. His establishment as a solo artist came after a three-year stint with Nick Cave & the Bad Seeds with the release of his classic first solo album, Moss Side Story.

He has released nine studio albums, including the 1992 Mercury Music Prize nominated Soul Murder, 1996’s Oedipus Schmoedipus, which includes collaborations with Jarvis Cocker, Nick Cave and The Associates’ Billy McKenzie, and his most recent release, Know Where To Run, which was in part inspired by a US tour, playing with Nick Cave & the Bad Seeds.